The mission of the NYU Debate team is excellence at every level with a focus on the Novice National, JV National, and the CEDA National Championships while creating platforms to empower diverse voices.

CEDA Debate teaches you problem solving, critical thinking, research skills and information filtering.   Of course, you can use it to become more persuasive through rebuttals, more insightful through cross-ex, more reflective through evaluating evidence or to quality for the NDT. However, it can also be a tool for activism, scholarship and finding your voice in the community.

HOW IT ALL BEGAN: In the mid-1990s, Jacob Weigler was a first-year student who had debated policy in high school and wished to continue in college.  When Jake came to NYU, there was no team.  Pamela Stepp, then director at Cornell University, directed him to someone who could help start one, a former nationally-ranked debater of hers who worked for a UN NGO, Will Baker who had previously coached policy and individual events for Cornell University, Columbia University and Queens College.  Baker agreed to serve as the team’s first coach and they joined together to form the NYU debate team.   Jake wrote a constitution and established a budget.  He recruited new novices (Vik Keenan, Ellen Hogarty and Justine Daniels being the first) to serve as officers and travel.

In its infancy, NYU was part of a consortium of the NY Coalition of Colleges, urban college debate programs that included Fordham, Rockland CC, Columbia, NYU, CUNY and the New School.    While Rockland CC and Queens Colleges had low five-figure budgets, these emerging programs had zero dollars.  The program functioned under the umbrella of the IMPACT Coalition, a nonprofit designed to extend debate skills to members of traditionally disenfranchised communities including women, the poor, people of color and first generation Americans using debate as an organizing principle.  IMPACT founded the NY Urban Debate League (NYUDL), Community Forum Debate,  the Coalition Institute and Training Initiative [CITI) as well as the NY Coalition of Colleges later dubbed the NY Coalition.

The NY Coalition leveraged the limited resources of each member school into something much greater.   Baker attracted

former debaters attending graduate school in business or law or working in NYC including Dan Passesser, Paul Young, Alan Dove, Annie Kastanek, Joe Patrice, and Bill Charron to volunteer as coaches (a tradition that continues today). These volunteers had the freedom to coach and set their schedules without the usual burdens of administrative responsibilities.  This novel approach engaged their love of debate and the desire to stay connected causing many to work extra hours well beyond their initial commitment.  Then NYU program alums like Daniels, Keenan, Brown & Rubino devoted their time and treasure helping this urban collective reach its potential.  This revolutionary partnership was honored with the National CEDA Community Service Award as the first example of debate as a social entrepreneurship strategy.   The Coalition "graduated" debate programs from NYU, New School and CUNY that have built their own legacies over the past decade or more.

MAKING HISTORY:  Richard Garner and Nathan Gorelick from NYU defeated Whitman College to become the first Northeast team to win a national intercollegiate CEDA Championship in 2003 before Harvard or Dartmouth.  Baker became the first African American policy director to secure a national championship since Melvin B. Tolson of Wiley College in 1935. 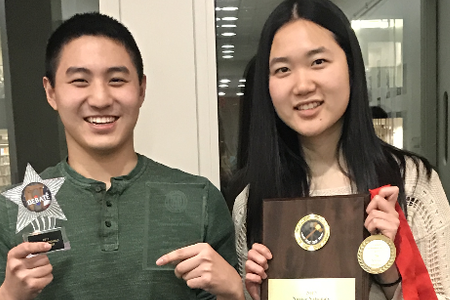