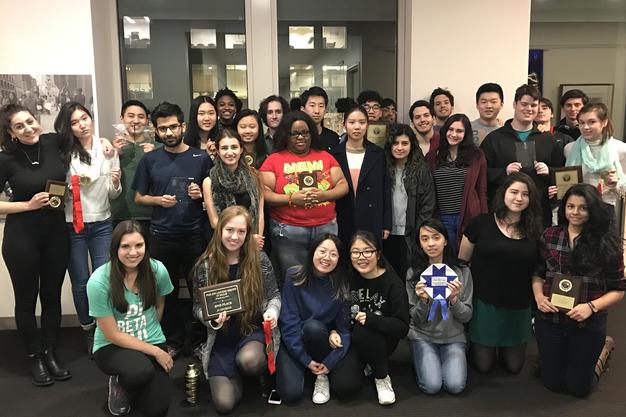 Membership on the NYU Debate Team is open to all undergraduate students in good academic standing at New York University. No prior experience with debate is necessary. The NYU Debate Team participates in NDT/CEDA Debate, also known as Policy Debate or Cross-Examination (CX) Debate. Students compete with a partner on teams of two and debate a single proposition for each year-long season (July – March). Students interested in competing are encouraged to join at the start of each academic year.

It is the express philosophy of the debate team that academics come first. The NYU team is committed to proudly representing the university in debate competition, promoting debate and informed public discourse in our community, and to supporting the expansion of access to policy debate for diverse populations locally and globally.  Additionally, debate develops students' analytical and communication skills through independent research, coaching, small group discussions, and competition.

​NYU is one of the largest debate programs in the country, so selection for a tournament is a honor. Students are selected for competitions based on their preparation, ability, team service and academic schedule.  Our goal is to allow each student to achieve to the best of his or her abilities without sacrificing their educational objectives. Most debaters attend between three and seven tournaments during the academic year.  All members are expected to maintain an outstanding academic record as a precondition for travel.

​Can I Participate In Other Co-Curricular Activities Along with Policy Debate?

Yes. We encourage students to diversify their co-curricular experience. Diversity is a vital component of college.  Obviously, if you want to win college tournaments and compete at the highest levels, then debate will have to be your top co-curricular priority. You can make exceptional grades, win college debate tournaments, join the Cooking Club and participate in the College Democrats or Republicans.  Time management is the key.