Big, big thanks to our partner, Brewer Attorneys for their on-going support of debate at NYU.  The NYU CEDA team has served as active partners with the Brewer Foundation on the International Public Policy Forum [IPPF] for a number of years.

This incredible experience connects high school students, college students and adults from law, business and academia as part of the largest written debate competition in the world.  Students from NYU serve as graders, judges and ambassadors for the high school teams volunteering over 300 hours in 2019 alone.  We appreciate and salute Brewer's investment in debate.  To learn more about IPPF, visit ippfdebate.com. 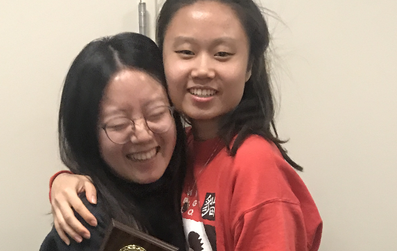 Thank you for contacting us! If needed, you will hear back within 48-72 hours.

For the first time in over a decade, the JV/Novice National Championships,  CEDA Nationals and the NDT will all be on the East Coast.    The NYU squad began the season very excited.  They've been winning tournaments [even closing out at semis], accepting speaker awards and executing strategies successfully each weekend.    It's poised to be one of their best seasons ever.

Now the BAD NEWS.  For the first time in a decade, NYU CEDA applied for contingency funds of $9,900 in December. Rather than receive even partial support, they were met with an absolute denial.   To make matters worse,  they were told to expect similar treatment when we request $11,300 to support our travel to the various National Championships in the Spring.

This news is devastating and a call for alumni, parents and believers in debate to stand up and donate to the team.  Very few teams can afford a $20,000 budget hit.  For an NYU team that already sits  in the bottom 10% of school-based funding among teams consistently ranked in the top 50 nationally, it is a formidable challenge.

Despite their continued success, NYU CEDA faces tough economic times.   We remain the only CEDA program in the top 20 in the nation that does not fund a full-time coaching position as Will Baker secured the Neil Berch Award and the Melissa Wade Award in back-to-back seasons.

Each year, travel expenses increase and university dollars decrease.  The team has yet to recover from the  $3500 budget cut in the Fall of 2018. Coupled with a cap of 1.5% on any increase requests in effect set them back five years.

Many of your fellow NYU debate alumni are volunteering their time as coaches and judges on weekends.

Whether you've given before or not, this is the year when as parents, alums and people who believe in these students and the power of debate, we need to step up and fill the enormous gap that the team faces.

Even beyond the students who might miss out on competing, the chance for younger debaters to attend and see high-level, national circuit debates LIVE is an invaluable tool for team development and education.

​Donations can be earmarked for specific events or general purposes  by selecting from the drop down menu items in the shopping cart.

Thank you for helping keep the transformative power of debating alive for 50-80 students a year!!